A lovely start to the year - the January lecture was all about English Paper Piecing.

Kate’s first foray into patchwork was as a teenager in the late 1970s. She started to create a large bed cover from scraps of fabric given to her by family members and finally finished it in 2000. As someone who hates to read instructions, she worked out how to do paper piecing from a picture but didn’t realise that the tacking stitches were supposed to go through the paper as well as the fabric. After some trial and error, she created her own method that uses larger seam allowances and retains the tacking. 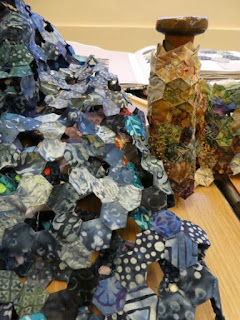 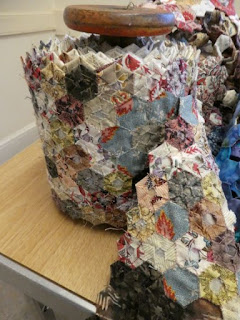 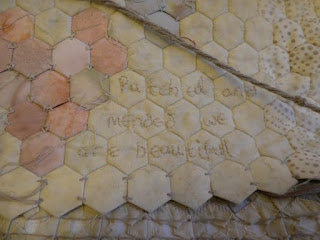 Since her teenage beginnings, Kate has learned to experiment with motifs, colours and techniques. She lives in Buxton which is too remote to allow her to attend any formal classes, but she has been disciplined in keeping notes about her ideas. She collects patterns and keeps them in a book with her design ideas and charts. She also maintains a colour diary to show the selection of colours used in each piece of work. Her early work was based on a small number of colours, but she plays games with herself to train her mind to handle larger numbers of colours and is now more adventurous in her colour combinations. She made a deliberate decision not to learn colour theory because she felt it would distract her. Finally, she also creates collage books. These are made from books that contain photographs or images that she likes. She then collects and pastes complementary images from magazines, greetings cards, etc on each page to hide all of the text. The example she showed us was created using a Kaffe Fassett book on interior design. Many of us thought this this was a wonderful idea that we would like to emulate. 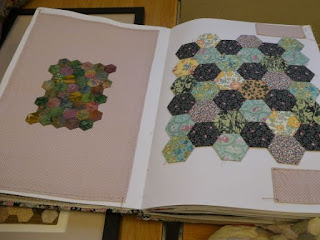 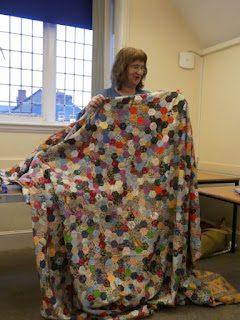 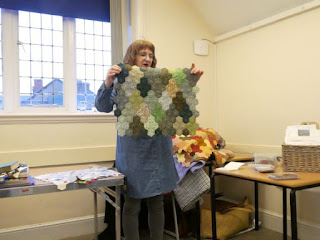 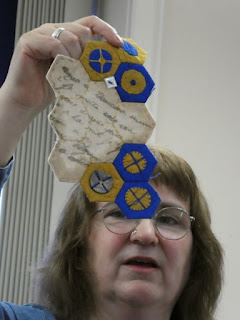 Kate has found that there are certain aspects of her work that are fixed: using all cotton fabrics, working in hexagons (now only small ones), hand cutting and stitching, paper piecing with large seam allowances, leaving in the tacking. From this base she then experiments with holes, different ways of combining patterns, joining hexagons with ties, stitched text to embellish her work, reversing her work to show the seams and stitches applique on the reverse, leaving in some coloured papers. Although some of her favourite colours are blues with lime green and Victorian hues, she is also influenced by “abrash” which is the natural variation that comes from working with fabric or threads that have been dyed in different batches, for example in different shades of cream. 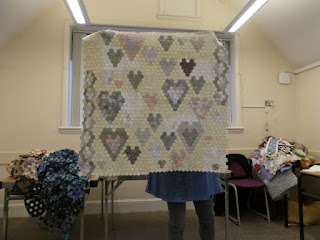 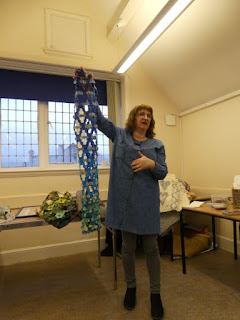 Her work is sometimes designed on the go and sometimes planned on isometric paper. She has played with converting Fair Isle knitting charts into designs on the isometric sheets. The result is designs that include holes. She also likes to take her work out into nature and photograph it in a natural setting. One piece of work, “Mermaid’s Pool”, was shipped from Buxton to Tristan da Cunha for her to photograph! She visited this very remote island with her husband on a construction project. During the trip she worked with local children on creating designs. She recorded the whole expedition experience in an 8 metre piece of work that became known as “The Toilet Roll” 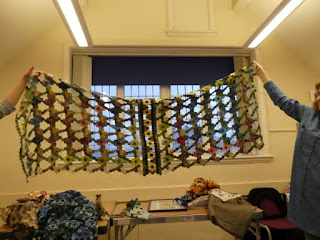 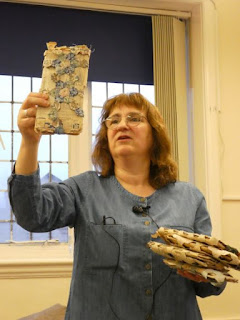 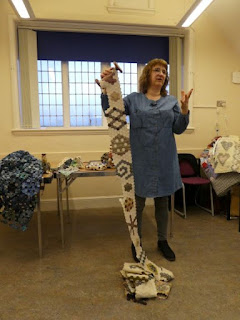 This year she says she is going to be working in whites, black and white and combinations with book text and is now preparing for her next expedition which is to the Falkland Islands.

(words and photo supplied by Gail T - thanks)
Posted by Elise Stewart at 18:46